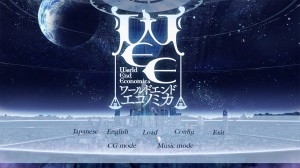 By rare exception, not an EVN review this week, but rather a recently translated VN of Japanese origins. It’s a doujin release at least, so budget wise it should be comparable to the commercial EVNs is usually talk about. Oh, and apparently the author of Spice & Wolf wrote the script.

With the completion of mankind’s first space elevator, mass colonization of the moon has become a reality. In a short amount of time, a gigantic domed city (Newton City) has been constructed and a large number of people have emigrated to space. Yoshiharu (‘Hal’) is the teenage son of two of the first colonists, and among the first generation of people to be born on the moon itself. He recently ran away from his working class home to chase a dream of wealth through stock trading. After several weeks of bouncing between net cafes and narrowly escaping the police, he ends up boarding at the home of Lisa who runs a small church.

Although the story of a runaway kid making money through internet stock trading doesn’t need to take place on the moon, the sci-fi aspects are well thought out and add some real flavor. It goes beyond discussion of practical issues like the effects of reduced gravity and the logistics of bringing supplies to the moon, taking the time to properly consider differences in both the economic and social climate due to forced emigration and the type of person attracted to living on the frontier of mankind. For now, most of it is superfluous to the main plot, but hopefully future episodes will be able to take advantage of the foundations built up in this first episode.

As Hal tries to settle into his new life, he repeatedly butts heads with the other runaway living at Lisa’s: Hagana. She’s around Hal’s age and a math genius, but emotionally immature and has a hard time dealing with other people. Unlike Spice & Wolf where the playful teasing between Lawrence and Holo is arguably the best part, Hagana and Hal are two bickering children who barely even get along until midway through. Hal in particular starts off as an annoying brat. He selfishly ran away from home and likes to pretend he doesn’t care about anything or anyone. He’s a lot like a younger version of the protagonist of G-senjou no Maou, only without the traumatic past to justify his self-absorbed greed.

Despite being marketed as an "Investment Pank Novel" (sic), World End Economica doesn’t go into much economic detail until an hour or two into the story. The first part is more character driven and while mundane events like clothes shopping and baking cookies always provide some measure of character development, foreshadowing or world building, it all feels rather trivial. It certainly doesn’t help that Hal starts out almost insufferable and Hagana is textbook tsundere. Finally, Hal is invited to a virtual stock trading competition which forms the main event of this episode, but first the invitation is dangled in front of the plot-hungry reader some more.

The big problem for a VN with this subject matter is how to make it interesting and accessible to a wider audience. The stock market is inherently abstract and maintaining a mental overview of all the terms and numbers can be difficult. World End Economica changes nothing about that fact — it doesn’t try to come up with any clever metaphors or anything like that. In fact, other than a generic graph background it really makes no attempt to visualize the trading itself at all. If you don’t find stock trading at least somewhat inherently interesting, this is not a VN for you.

There appear to be multiple different versions of World End Economica floating around with various levels of polish. I can’t comment on the state of the version currently offered by MangaGamer, but my DLsite copy is a little rough around the edges. It’s always scary when a commercial release only runs in a Japanese locale or otherwise throws a cryptic error. Aside from the title screen and main textbox, the user interface remains untranslated and the CG/music galleries don’t seem to work. As for the quality of the translation itself, it’s hard for me to judge accuracy, but the quality of English seems on par with other commercially translated titles.

I have one main problem with the presentation and it’s the overuse of black screens. It’s particularly bad during the first part of the VN, where disturbingly often you’re just reading exposition from a small text window with no other graphics and sometimes not even any music.

For a budget release, World End Economica has quite a lot of event CG. Nearly all are devoted to character moments since as I mentioned before, the economics part has basically zero presence in the visuals. The majority of the VN takes place within the confines of Lisa’s rather bland apartment, but for the few instances where Hal does go outside, we’re treated to some impressive looking vistas of the domed lunar city. The character designs are fairly average but they at least stay consistent between sprites and event CG. Some of the side characters are a little too cartoony for my tastes compared to the mostly serious subject matter.

The user interface is rather nice, especially for an indie release. Popup windows are all elaborately styled with little details such as color coding the save/load screens to prevent accidents. The main textbox, while unfortunately so bulky as to nearly swallow poor Hagana whole, continues the same sort of styling as the rest of the GUI. While its decorations are on the flashy side, they help carry the feeling of sci-fi into several otherwise mundane looking backdrops.

Past a rough opening with an especially annoying protagonist and sorely lacking in economics, Hal and Hagana mellow out a bit and the story turns into a decent little tale of a teenage kid trying to play the stock market.