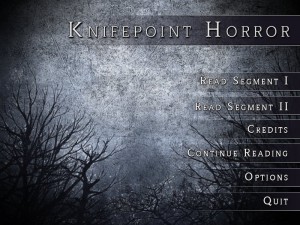 Adapted from the novel of the same name, Knifepoint Horror is an anthology of loosely connected horror stories. The current VN release contains two stories (segments) with more to be added later. While still largely faithful to the book, the VN version thankfully didn’t keep the no-capitalization, no-paragraphs style of the original. Regardless, the writing is still very book-like, omitting direct dialogue in favor of diary-style summaries of what was said. I’m not sure I agree with that choice — it adds some distance between the reader and the story. While the distance helps somewhat with the unsettling atmosphere, it also makes any danger feel less imminent and therefore less frightening. Often, the main character isn’t even the one in most danger.

The first segment by far the longer of the two, but lot of its extra length is spent on random people telling the main character various spooky stories. These interruptions are frequent enough to become an annoyance and there’s not enough of a pay-off in the end to justify all the set-up. Another thing that bothered me was the behavior of the protagonist. He’s only in town for a job (one he desperately needs, but still only a job) when ‘shit starts going down’ so to speak. Despite getting bitch-slapped by spirits, he refuses to leave despite being given ample opportunity. The conclusion is fairly anticlimactic: more supernatural scary things happen, MC runs away.

Segment II is more straightforward, telling only a single story of a college student who goes missing on Halloween. It sets up some cool elements with a creepy coachman riding along a trail of hanged corpses and a strange memory loss surrounding the event. Like the first segment however, it never really goes anywhere with it. The potential it has evaporates in a puff of mild disappointment with a lackluster resolution.

In these first two segments, at no point did Knifepoint Horror actually frighten me. With a name like that I expected something a little more edgy and action packed. Supernatural horrors populate its world, but so far they haven’t been all that threatening. For both segments, the ending was a bit lacking in dramatic conclusion.

This is one of the few VNs these days still using a NVL mode (screen-filling) textbox. Normally there’d be a conflict between displaying text and the sprites underneath, but KPH doesn’t use any sprites. It instead tells the story mostly through static backgrounds without showing the characters on-screen. The background images are dark (partly due to the overlapping textbox) and rough — both things you want in a horror VN. Several BGM tracks sound shrill and unpleasant (low bit-rate encoding may be a factor in that).

Knifepoint Horror has potential, but I can’t really recommend it based on these first two segments. The VN sets up some interesting spooky elements, but then doesn’t really do much with them.