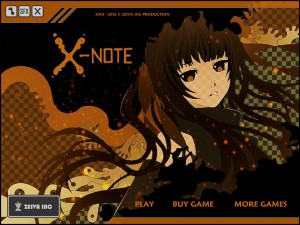 Essi is a psychic girl whose mother died under suspicious circumstances. Her mom left her a USB key necklace with a locked folder called X-Note. One day, a boy appears out of nowhere and forcibly enrolls her into the Xen Institute, a private school which Essi’s mom co-founded. The boy, Yuon, promises her information about the X-Note folder if she helps him investigate a murder that happened at the institute. The principal, Skid (Yuon’s father), was found murdered and Dr. Loil, head of the science department, went missing on the same day.

Two obvious questions: Why does he need Essi to investigate the murder, and how is he able to enroll her into the institute without her knowledge or consent? Essi comes up with the same questions, but Yuon brushes her off and she never brings it up again. That’s a recurring annoyance with Essi; her excessive passivity. She’s aware of people being creepy/suspicious/weird, but never acts on it. She simply waits for things to happen, never taking the initiative.

The story follows a fairly rigid dating-sim style day structure. Each day starts with the same music and background image, followed by a short event and a psychic training minigame at the end of the day. Most days are very light on plot-related content further accentuating the rigid (unnecessary) day structure.

At the end of each day you get to choose between one of three minigames, each corresponding to a psychic skill (stat) to train. According to the in-game help, later chapters have certain stat requirements. The minigames themselves are knuckle-dragging-chimp-level. Two where you need to click with the correct timing hinted by an animation, and the third is a 3-card memorization challenge that asks you to memorize the exact same 3 cards each time. Furthermore, there’s no chance of failure — you get infinite retries.

At its heart though, X-note is about a supernatural murder investigation. Despite my gripes concerning form and pacing, the main plot is pretty interesting. Despite being marketed as an otome game, the demo ends before any romance begins.

X-note uses a custom engine made in Flash. As is often the case with custom engines, some standard features are limited/missing (auto read, hiding the text window, etc). There’s no text speed setting, the entire paragraph always appears instantly. A rollback-like feature exists (basically a text log, but the sprites change back to the expressions they had), but it only goes back until the last background change making it nearly useless.

The sprite art is really good, especially the shading. Each sprite has multiple expressions and a blink animation, but only a single pose is used per sprite. A thick outline helps the sprites pop from the backgrounds. The backgrounds themselves are simplisticly drawn, going for a very stylized look. This can be seen especially in the shading, which for the backgrounds consists almost entirely of flat colors and simple linear gradients. The number of backgrounds used is decent and they look alright, aside from a generic office background which looks like it was ransacked by wild buffaloes.

Some technical problems really let the art down. JPEG compression artifacts can clearly be seen, especially on the backgrounds. There’s no fullscreen button or any other official way of playing the demo in a window that fills a respectable portion of the screen. Manually opening the SWF in a new browser tab does increase the size, but all images are nearest-neighbor upscaled making them look hideously blocky and further magnifying the previously mentioned compression artifacts. 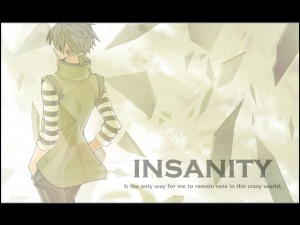 The same image scaling problems plague the in-engine opening animation. In addition, the frame rate seems very low (15 fps?) during the OP (in-game animations have the same problem). The opening animation itself is standard fare, with character introductions and some (emo poetry-level) vague on-screen text hinting at further conflict. The accompanying music is rather dull.

The user interface has a few problems. The load screen is accessed by pressing the save button — which only appears after starting a new game, reading the prologue and watching the opening video. There’s no load/continue option on the title screen at all, a possible side-effect from being originally released without a save option.

An innocent looking cross button next to the mute volume buttons doesn’t hide the (large) interface/textbox as you might expect, instead it returns you to the title screen without confirmation.

But much, much worse in the most horrific hotkey-related disaster I’ve ever witnessed; pressing enter instantly skips to the end of the scene/day (most of the time, in certain scenes it randomly doesn’t do anything). Every other VN uses enter to advance text, every. single. one. It’s a time-tempered tradition, fortified by reading dozens, nay, hundreds of visual novels over the years, etching the mechanics of the key-pressing motion into my soul. I accidentally pressed enter like 5 different times right after using the mouse to play one of the minigames, make a choice, or save.

An interesting story and good art, X-note does some of the most important things right, but is let down by a bland main character and a dating-sim like day-by-day format. Some odd technical issues make you doubt the choice of using a custom Flash engine.