I don’t usually talk about in-progress VNs on this site, but with so many VN Kickstarter projects being launched these days, the number of demos worth talking about has shot up to the point where I can no longer afford to ignore them. I’m not entirely sure if I’ll keep this exact format, but expect some more previews in the future. 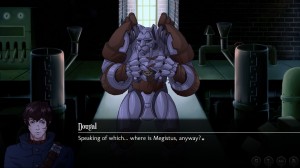 Originally pitched as a dark fantasy story with elements of steampunk and alchemy. After playing the demo, Icebound seems a bit light on those dark and steampunk elements. At one point there’s a Sabertooth-man-robot with a few gears pasted on his belly, but other than that the settings seems more standard medieval fantasy than steampunk.

As far as the basic plot is concerned, tell me if you’ve heard this one. A young alchemist travels the land, looking for a way to turn his friend back to human after said friend got transmogrified in an alchemical experiment gone wrong. Our alchemist hero randomly ends up in some town where he hears a rumor about a possible philosopher’s stone which would give him the power to restore his friend back to human form. Yes, the basic concept of Icebound is surprisingly similar to Fullmetal Alchemist, only without the charm and not nearly as dark. I expect the story to divert more in the full game, but so far it’s pretty much like an FMA filler episode.

Icebound attempts to add more game-like elements compared to most modern visual novels. There’s a simplistic order/chaos morality system where some choices increase one or the other. So far the only thing that really does is break immersion. Whenever Dougal needs to use his alchemy, a puzzle minigame is triggered that determines whether or not he succeeds. I didn’t actively dislike it, which is already a step up from the norm for EVN minigames, but thematically it has very little to do with alchemy.

The Icebound Kickstarter was recently funded with an estimated release date of October 2013. 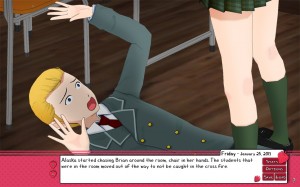 A commercial game using a character creator to make its sprites is not something I want to encourage in concept, even if I don’t have too many complaints in this particular case. Destiny Fails Us is an upcoming otome game using ComiPo! renders in place of character art. Despite a Kickstarter campaign, there is no indication that this will change. The background art currently consists of various free-to-use renders with a promise of improvement, but no concrete examples of what the backgrounds of the full version will look like.

The story of Destiny Fails Us is a surreal combination of slapstick and very heavy subject matter. What appears to start out as a cute love story almost immediately shifts to mentally ill people stabbing, stalking and assaulting those around them. What doesn’t help is that the VN doesn’t seem to realize just how extreme its characters and subject matter are. If it tried to be a dark comedy that would be one thing, but the only source of comedy is the clash between subject matter and cutesy exaggerated anime expressions coming from the ComiPo! characters.

Before Destiny Fails Us, I always thought achievements in a visual novel were a stupid idea. Now I know they’re a stupid idea. You get achievements for starting the game, running away from home, etc. There are also some traces of dating sim gameplay, although most of it doesn’t seem to be hooked up to anything yet. Strangely, there’s no mention of dating sim gameplay anywhere on the Kickstarter page, so wonder what’s up with that. 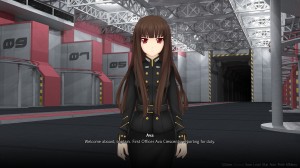 Despite being the lone freeware VN this round, the Sunrider demo is definitely the most visually impressive of the three. Minor animation is used to great effect, especially during the space battle near the end of the demo. Although the most impressive, the Sunrider demo is also by far the shortest, functioning more as a teaser than a representative chunk of the final product.

The overall tone of the demo is excessively epic, something which is further enhanced by the choice of music. I guess you’d have to try pretty hard to make a war between galactic empires not seem epic though. By the end of the demo, millions of innocents have been slaughtered. As the current demo is just a short prologue, it’s hard for me to say what the rest of the VN will be like — the bulk of content could just as easily turn into Galaxy Angel as it could go move towards Muv-Luv Alternative.

I’m not too crazy about the space combat minigame, and most of it has to do with the user interface. For some reason (maybe just unfinished?) everything is handled by selecting options in VN-style menus rather than directly selecting your craft and controlling it through more intuitive means. I’m sure the interface will be much less clunky by the time the full version comes out, whenever that will be.

The Sunrider dev blog can be found at http://samukun.wordpress.com/.