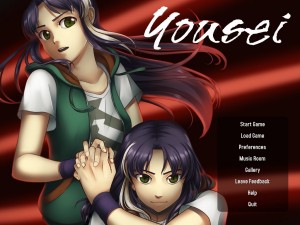 A week after the events of Kansei, Kangai gets a call from Marissa (sideplot reporter lady). She hasn’t been able to track down Mr. Auten’s business partner, Shen Guan, but she did discover another angle of investigation although it’s a bit of a stretch. Both Auten and Guan worked on an experiment during grad school twenty years earlier. The same experiment that ended up killing half its test subjects and seems to lie at the base of everything. The man responsible for overseeing that experiment, Dr. Johansen, has recently returned to Edgewater for a limited time. Kangai and "the gang" travel to Edgewater University to ask Johansen some questions and hopefully find out more about the experiment from way back when.

Their plan to disguise themselves as prospective students and snoop around is almost immediately disrupted when Kangai is mistaken for a burglar. The video of Kangai they found back at the end of Kansei turns out to be a security video from Johansen’s lab. But the person in the video is revealed to not actually be Kangai, just a lookalike. The imposter was somehow convincing enough to fool not only Kangai’s friends, but Kangai himself as well. This feels like such a fucking retcon and after realizing it’s not really Kangai, they pretty much forget about the entire video for the rest of Yousei. Never mind there’s a Kangai lookalike stealing research papers from Dr. Johansen…

To be fair, their investigation is cut short by the obligatory murder investigation part of this episode. Without warning, Naoki’s spider sense starts tingling and he dashes to the other side of the campus where they find Dr. Johansen’s freshly mangled corpse. For some reason Kangai doesn’t feel like activating his Kansei that day and he runs away from the dead body. I guess he doesn’t want to know who just murdered his only lead. His running away plan is foiled by a small drop of blood dripping down on him as he’s going down the stairs. Contact with blood apparently activates a super-powered version of a person’s Kansei. More and more special abilities keep getting added over time — will it ever stop?

The beginning of Yousei makes it seem as though there will finally be some progress in the series’ main plot. But then the mysterious video plot is forgotten and most of the new revelations are just things we already knew from previous epilogues and non-canon routes. It’s getting progressively harder to keep track of what exactly Kangai knows and what he doesn’t in the canonical path. In particular the twins’s route has some major revelations that will have to be rediscovered in the canonical plot line at some point in the future.

There’s a certain frustration that comes with having more information than the detective. The reader knows a certain character is one of the ‘bad guys’ and Kangai is putting himself in grave danger by trusting them, but that’s reasoning based on information he doesn’t have. You have some freedom to distrust suspicious people, but not so much if you want to actually reach the true end. You’re forced to play the fool while they act extremely suspicious right in front of you.

The murder investigation is very weak this time around — Kangai running away from the crime scene is just the start. I mean, the body is discovered by a guy who has a thing for making photos every ten seconds or so, yet no-one asks to see what photos he’s made. When photo guy spontaneously decides to show Kangai a photo, it ends up solving the case almost immediately. The police is called, but only Gurski shows up again. Is he the only police officer in Edgewater or something? Once more, Gurski tasks Kangai with finding the culprit yet refuses him access to the crime scene. Kangai is also supposed to be undercover, but then he goes around campus asking everyone what they were doing yesterday between 10:00 and 11:00.

The investigation itself mostly revolves around some shenanigans with key cards and computer logs. Kangai gets so caught up in it he forgets to investigate a few other promising leads. Not that it matters — he solves the case by being handed convincing physical evidence. It’s really irritating to spend the majority of the game investigating and in the end the case basically solves itself. Then again, the murder is treated as a secondary concern to the point where they actually forget to solve it in one route. Kangai doesn’t seem particularly motivated to find Johansen’s killer. He was there for information Johansen might’ve had, so it makes some sense he’d be more interested in the information than the deceased, but then again he doesn’t seem particularly driven to hunt for the information either.

In some ways Yousei is an improvement, in some ways it’s a step down in quality. My main annoyance is that Kangai is a dunce and an awful detective. He puts complete faith in extremely suspicious people, is incapable of thinking on his feet or telling a lie and he has the deductive powers of a potato. He keeps forgetting to follow up on important leads, yet Aki/Naoki/Gurski seem perfectly content to stand around doing nothing while Kangai solves the case (almost by accident). The true end at least makes it appear as though the main plot is finally going somewhere, but worryingly the murder cases are getting weaker with each game.

The gameplay is pretty much identical to Kansei, but without any of the puzzles. Instead, there’s a whole lot of moving around a much less efficient space — you constantly have to click like 8 times to go back and forth between people. The ‘game’ part consists of talking to everyone, then wandering around aimlessly in order to find where a conversation option has magically appeared. There aren’t quite as many round trips as in Jisei, but the much larger campus area makes hunting for the next line of dialogue somewhat tedious. The examine function is used exactly once and it’s to click on a random background object in order to trigger the next plot event.

Having to play through the entire game at least four times is a real chore. In the ideal case, after getting the first ending it takes approximately forty minutes of skipping to get to the maybe 15 minutes of new content from the other three endings. Because of how the game is structured you can’t just hold the skip key, constant manual interaction is required. Yousei is a bit longer than Kansei at 2-3 hours (excluding time spent skipping).

The event CG are now much more dynamic.

I was surprised to see the sprites of the main cast redrawn for Yousei. The character designs were tweaked as well, and the ‘Kansei crew’ now actually look their age. There’s still only one pose per character (with two arm position variants), but as was the case in Kansei the large cast and short length prevent the graphics from getting stale. Backgrounds are a step up, the 3DCG is somewhat soulless but merely bland instead of the previous installment’s Photoshop disasters. In a few cases, the camera angles used in the backgrounds really don’t match the sprites. There’s still a large number of cut-in images, but now also an increasing number of full event CG.

The voice acting is still good, my only real complaint has to do with audio leveling — shouted lines often sound quieter than regular dialogue.

The murder case feels half-assed and the solution is frustrating. Promising leads are often forgotten or shoved into non-canonical content. Kangai is a naive fool and the plot has to rely on that fact to function. The increased focus on the overarching plot at least helps elevate the series above the murder-of-the-week feeling of the first two installments.

One thought on “[review] Yousei”