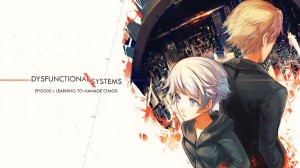 During the early April EVN deluge, Dischan released the first episode of Dysfunctional Systems. Given the timing of its release and an estimated release schedule of one episode per year, I guess this is what they’re doing in place of NaNoRenO from now on.

Winter is a 14 year-old mediator in training. Together with her stone-faced mentor, Cyrus, she’s traveled to a parallel world in order to, err… help out in some way or something. For now, the justification for meddling with other worlds remains mostly in the dark. Despite that, the first half of Dysfunctional Systems is basically one large info dump. It introduces the characters, sort of explains the mechanics of being a mediator and finally develops the world they’ve traveled to in order to set up a meaningful conflict later. The only thing really breaking up this initial exposition grind are a few out-of-place feeling attempts at comic relief (suddenly wacky anime hijinks in an otherwise serious sci-fi story).

In addition, Winter spends some time philosophizing about various things and how they relate to her sense of morals. Knowing virtually nothing about the world she came from makes these hard to place and/or care about.

Eventually, the main conflict reveals itself. The citizens of Brighton feel they’re still being oppressed by Gabrea, despite Brighton declaring their independence from Gabrea over a hundred years ago. Frustrated by the persistently awful economic situation, Brighton’s president threatens to nuke Gabrea unless they comply with his demands. Interestingly, nukes hadn’t been invented yet in this reality and curiously, the president forgot to demonstrate the difference between a regular old bomb and a fusion bomb. That’s pretty dumb. Winter and Cyrus teleport to the president’s office (an ability they gain out of nowhere) in the hope of stopping a nuclear war.

How to deal with the president leads to the only significant decision point in the VN. Winter can choose to either obey Cyrus or ‘rebel’ and try to change his mind. Rebelling leads to an awkward minigame-like series of choices in which Winter tries to convince Cyrus. No matter whether you obey or rebel, the end result only changes slightly. The fusion bomb detonates which somehow leads to self-sustaining nuclear fusion, igniting the atmosphere and killing all life on the planet. From my limited understanding of physics, that’s not possible, especially not unintentionally. Upon witnessing the explosion, Winter and Cyrus quickly warp back to their own world — something they couldn’t do before — but only after receiving a dramatically convenient high dose of radiation.

Cut to Winter puking her guts out due to radiation poisoning. For some reason, it needs to be described in excessive detail complete with sound effects and one of the very few full-screen event CG. After that, the writing POV shifts to Winter’s roommate. Not only does the point of view change, a NVL-style text display is suddenly used on a regular basis. It even does away with the standard sprites+background presentation used throughout the rest of the VN and instead handles the entire scene through event CG variations. All these changes make it feel like a different VN entirely.

Episode 1 is more like a prologue than a first chapter. Winter’s world, life and friends only start to show up in the epilogue. The rest of the VN is dedicated to introducing basic concepts through an ‘example’ world. On its own, episode 1 lacks pay-off for all the set-up.

Sprites and backgrounds are up to par with the high standards set by previous Dischan releases. Aside from Winter, pose changes are only sparsely used (as expected of a $5 VN). Oddly, despite being a main character and almost constantly on-screen, Cyrus is the second-least expressive character. His head rotates slightly in one expression, but that’s about it. He sometimes looks more statue than human. Tiny cut-in images are used whenever a character needs to be shown doing something not adequately expressible with their regular sprites. I agree with the principle, but not the execution. Dysfunctional Systems uses cut-ins like stickers, pasting an arm or a gun on top of a sprite. It looks silly, even more so when animated.

Where Juniper’s Knot made great use of animation and cinematic effects, most of the attempts at animation in Dysfunctional Systems don’t really work. Characters awkwardly slide around the screen and the animated walking scenes look ridiculous — giving me the illusion characters are riding on oval-wheeled skateboards more than anything else. The writing keeps forcing situations that are hard to display, not taking the limitations of the medium into account…

The user interface is very professional and well polished. I like the existence of the integrated encyclopedia, although popping it up automatically at one point probably wasn’t necessary — all the important bits are also explained elsewhere and there’s enough info dumping going already.

While the background music is pretty good, it often stops for long stretches of time. It’s especially dire in a few cases where there’s nothing going on visually, the dialogue isn’t terribly exciting and then even the background music cuts out. Right near the end of the VN, the opening video finally plays. It’s an impressive video, but playing it so far in makes episode 1 feel even more like just a prologue rather than a full chapter.

There’s not much to episode 1 on its own. We’re introduced to a number of things that might come in handy in future episodes, but the main conflict of this one isn’t that great. The $5 price tag isn’t nearly as big of an obstacle as the year-long wait for the next part.